It was not my destiny that there would be a union with my beloved. If I had lived further on, there would have been this same waiting (waiting for his beloved).

Ghalib expresses in these lines that he was never fated to meet his beloved. He says that if he lives more, he will have to continue this wait – meaning that he is not living life the way he should be because he is spending his time waiting instead of enjoying life.

I lived by on your promise, be aware my love! that this statement is false. I would have died of happiness had I believed in it (on your promise).

Ghalib here says to his beloved not to trick herself into thinking he’s living off her promise. He says not to assume that he has trust in her, just because she promised she would come back. If he did trust her, he would have died of happiness by now!

Someone should ask my heart about your half-drawn arrow. Where would this pain have come from if it had gone through the liver? The half-drawn arrow is an arrow that was shot with no full force. Here they are analogies for the slight and subtle glances of his beloved.

Ghalib says to ask my heart about her subtle glances (तेरे तीर-ए-नीमकश), which are like sharp arrows that have pierced my body and caused me pain. If her glance had pierced my heart completely, I would have died long ago.

What kind of friendship is this, where the friends have now become counselor? If only there were some healer, if only there was some sympathizer

I think friends were the same in Ghliab’s time as well, he says what kind of friendship is this? Like today, during that time also when you are in trouble, friends just start advising you (नासेह, adviser/preacher),  as we do, Ghalib also wishes, if we had friends who can share secrets (without telling anyone) and share our pain.

To whom should I say what it is, this night of grief is a distressing experience. Why would I complain of dying, if it had occurred to me only once

The poet is grappling with how to explain his grief to others, and questioning whether or not it’s worth sharing his experiences with grief at all. He reflects that dying once would be easy, but the pain of grief is a death that happens every day and every moment.

Oh! these topics of mysticism and those words that you say, Ghalib. We would have considered you as our chief had you not been a boozer.

This particular ‘maqta’ by Ghalib is quite astounding. It’s unclear if he’s referring to himself or someone else in this poem, but it seems to be directed towards himself. He says, “Your (Ghalibs’) style of narrating, thinking and your words are amazing and we might have considered you a philosopher/head if you were not drunker.” It’s no secret that Ghalib was a heavy drinker, and he once said “I am half Muslim as Islam does not allow to drink and eat pork. Ghalib did not eat pork but used to drink a lot!” This poem seems to be a reflection on his own life and how his drinking habits may have held him back from achieving more.

Leave feedback about this Cancel Reply 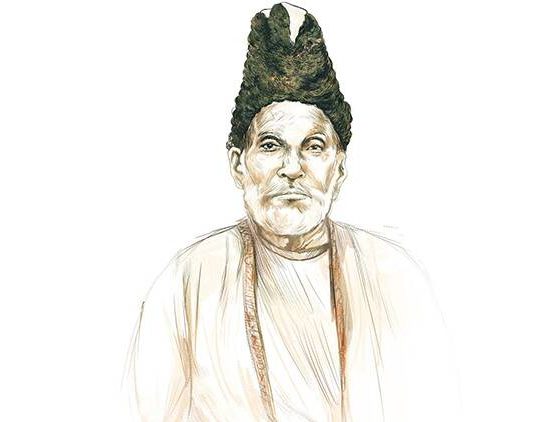